This is the transcript for the video located here: 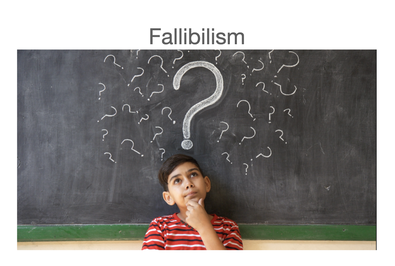 Or it can be reached via this link for the video or if you prefer audio only the podcast version, episode 90 of ToKCast is here.

​On Apple devices the podcast can be subscribed to and downloaded here: https://podcasts.apple.com/us/podcast/tokcast/id1447087694

or on Spotify here: https://open.spotify.com/show/6q5iPRQthC8Tk8XOri70lv

Fallibilism is the stance that you could be wrong.

And the reason for that is that a fallibilist knows there is something to be wrong about.

And when we say "wrong about fallibilism" we mean there is something to be objectively wrong about.

There really is nothing more to it.

But the consequences of this are vast and far reaching and worth unpacking.

All of what I have just said about fallibilism makes fallbilism the actual strict opposite to relativism. Relativism after all claims there is nothing wrong to be about in any objective sense. There is no being objectively right or wrong. People just make claims relative to who they are, where they are or when they are.

And fallibilism is opposite simultaneously to forms of dogmatism which say one cannot possibly be wrong because one is in position of the dogma - the final truth on some matter. If one takes justifications seriously - if one is actually justified by some means (it could be “the evidence” or it could be Bayesian inferring) then one has the stance they are not wrong. They are justified in their truth.

Only fallibilism correctly walks the line between its two opposites: relativism and dogmatism.

And because they eventually find that project always fails: they will conclude that trying to justify as actually true some claim or other is a fools errand and thus conclude the pursuit of knowledge itself is a pointless exercise by the means of justification. They recognise the error but not the solution. The error they recognise - correctly is that justificationism is false - we cannot justify our knowledge as true in science (because no amount of evidence ever shows something might not be shown false, no matter how confident or close you think you might be getting to absolute certainty) or in maths (because you never can be sure or rather you never can prove as true your axioms) you never know how you might be labouring under a misconceptions and so on - because of all this in whatever domain from science through to morality and more - the justificationist concludes - wrongly - that “knowledge cannot therefore be possible”.

So, many times, they - the people who think knowledge is about justifying things as true -  fall into relativism. Because they think it’s the only option left. So they conclude we must all have our own morality, for example: because it’s all culturally contingent - it depends on the tribe in which we were raised. Or we all have our own models in science: none of these scientific models ever actually track reality but rather they are just convenient tools that work in some narrow domain but never tell us anything true or false about reality. Reality might not even exist. There is no fact of the matter after all. Just subjective understanding and that is not anchored to anything real. After all there may not be anything real. There is nothing perhaps to even be wrong about.

So all of that is one route. The other route is just to embrace justifying as true our beliefs even though we know it has failed. So we end up in authoritarian dogmatism. We then must hear about settled science, or the perfect inerrant word of God or we must believe as true “the evidence” as though evidence is a final theory in itself that never requires any interpretation. Evidence is prima facie facts - it does not depend upon theory itself for its interpretation. Dogmatism may be just as prevalent today as relativism and that is not mistake because as I said they are in truth closely aligned in denying the possibility of being in objective error.

So it is only fallibilism that is the best and correct solution to recognising that we cannot justify as true our beliefs. Or even justify them as probably true. None of that is needed because our good explanations of the world are good by measuring them against their competitors. Rarely are there any competitors. But when they are only the fallibilist can properly understand how it is they can be objectively wrong and that techniques like experimentation can reveal and objective error in all of them except for the one left standing - the one that goes unrelated by its encounter with that really existing reality.

Both relativism and dogmatism are morally dangerous alternatives. The relativists because they are impotent in the face of evil. The dogmatists because they will mistakingly fight to the death to defend an evil they think is good.

Where other philosophies like empiricism have attempted to walk a path different to pure dogmatism or deference to authority and relativism (or its more ancient cousin known as radical skepticism which also denied the possibility of knowledge), all of these get it wrong because they think what we should desire is a search for truth that can somehow end…in the truth. But it cannot. We can search for truth, and we can fail to find it - objectively. We do search for truth - we search for objectively good solutions to our problems and we do make progress by correcting errors.

Progress means objective improvement. And objective improvement means we have managed to find out something more about reality - something that brings us closer to the truth about what that reality is. But reality is infinitely complex so it is impossible to have a finally true statement about it. Our claims about it amount to statements - not propositions (propositions being elemental claims about reality that have a final truth value). What we have in our explanations of the world are instead statements - we make statements about reality and a statement is an approximation to a proposition. Propositions are represented by symbols in, for example, formal logic and pure mathematics. We assume they are true in order to find proofs of theorems. But it’s all assumptions: where we begin are the axioms and axioms are sometimes simply called “assumptions” in formal logic for good reason.

Since the Enlightenment, the key feature that allows us uniquely to achieve this is our reason but we can be even more precise than merely this. The key feature of our reason that allows for progress is a tradition of criticism which we can embrace as individuals and as whole civilisations. This critical approach is about recognising that what know is not the final word. It has flaws. We could be wrong about it. So to make progress we criticise it and through this criticism we can identify errors and then, with some effort we can correct them by creating new explanations.

Fallibilism: it is the opposite to relativism. Fallibilism says you can be wrong about something. And in embracing the fact you can be wrong about something you realise that you have before you an opportunity for progress. This is the only known way knowledge can be created: the identification and correction of errors. The possibility of error is only contained properly within a fallibilist framework. It is thus the only robust way of making progress. All other options are fragile to falling into the trap of thinking error is not possible either because so called “error making” is merely relative to who you are or making an error is simply not possible given one already has the truth or some calculation or some book or authority or some piece of evidence testifying to the fact error simply is not possible here.

Fallibilism: it’s not relativism. It’s not dogmatism. It is merely the recognition there is something out there to be wrong about - and you, personally, could be wrong about it. And so could everyone else. But, with an effort, we can identify what we are wrong about, correct it, and make some progress.

Of course I could be wrong about this. Or some of this. Or all of this. But only because there is something to be - objectively - wrong about.